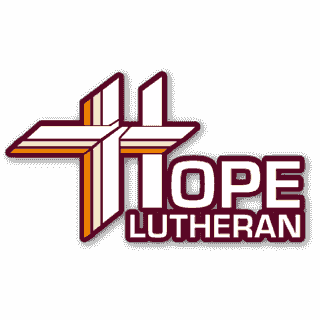 Hope Lutheran School began educating children on September 12, 1960, after several years of careful planning by church members. Mr. Don Simpson was called as the first principal and upper-grade teacher and, along with Miss Shirley Mosshammer, began educating approximately 60 first through eighth-grade students in an atmosphere of Christian love. The necessity for additional classroom space was quickly recognized and plans for a new education building were made. The new education building was dedicated in March 1964. A kindergarten class was added in  1967. The current sanctuary of Hope Lutheran Church was dedicated to the glory of God in 1969, freeing up the former sanctuary space for additional classrooms. Yet another building project in 1990 added additional classroom space and two preschool classrooms which allowed for the opening of Hope Lutheran Preschool that same year, directed by Mrs. Bonnie Hill.

For six decades Hope Lutheran School has been blessed by the unwavering support of the congregation of Hope Lutheran Church. The congregation has provided financial support, facilities, and countless hours of volunteer labor to maintain and enhance the school and its educational programs.

The school has also been blessed by the service of dedicated principals, preschool directors, day school teachers, preschool teachers, and classroom aides. A common trait among these educators has been a mission to serve their Lord and to serve families by caring for and teaching God’s most precious blessings, children. Over the years many Hope graduates and staff members have recognized the unique environment at Hope by having their own children attend Hope. In fact, each year Hope recognizes graduates who are the children of graduates with a “Legacy of Hope” award.

Hope provides the opportunity for your student to discover and develop their passion for learning. We go beyond classroom education by building strong relationships with all Hope families through our dedicated teachers, church community, and Christian Values. The value of these relationships is reflected in the outcomes of school programs and the achievements of individual students.